…and thus was born The Union.

The back story has been widely reported:  How Leon was Elton’s idol (calling him “the greatest piano player that ever influenced me”), how they hadn’t seen or talked to each other in over 30 years, how Elton was listening to Leon’s music while on safari in Africa, and how much Elton wanted to give back to Leon, one of the people who had helped make him who he is. 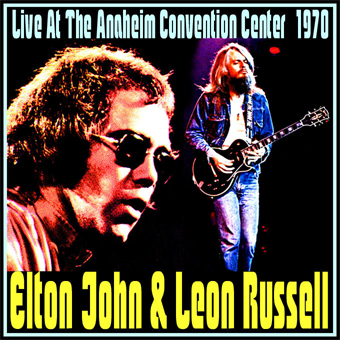 Jump ahead to July 2010, The Union was released and it is magnificent!  (Don’t just take my word for it, ask Rolling Stone).  And now I get to see the behind-the-scenes story!  I had the immense pleasure of watching the premiere of The Union (a documentary by Cameron Crowe) on HBO last night.  It brought me to tears, I tell you, it brought me to tears…on more than one occasion as I took it all in.

You know, I’ve heard how Elton and Bernie collaborate, very separately yet with uncanny and remarkable synergy (“two rooms at the end of the world”).  I must say, though, that I’ve never seen Elton’s creative process in action before.  And for a fan like me, that was mesmerizing.

He said he had come in with 5 songs, to kick start his process.  He and Leon started with “Hey Ahab” and completed 9 songs in 3 days.

Elton was very steely eyed at some points, particularly as he was writing the Music for “Gone to Shiloh, calling songwriting a “normally very private process.  I enter a movie made up of Bernie Taupin’s words.  It’s a private world.  Before it belongs to anyone else, it belongs to me.”

At other points, he was like a kid in a candy shop, his eyes full of joy and amazement, watching Leon “come to life” during their studio time together.

Unquestionably, the most poignant point in the film comes when Leon plays for the first time “The Hands of Angels,” the song that he wrote for Elton and Johnny (Elton’s manager).   This song has special meaning for me, too, so I must admit that I had “clouds in my eyes” as I watched.  Elton was visibly overcome with emotion.  How could you not be?  Elton tells Leon jokingly that it “ruined my mascara.”  And Leon responds, “That’s what happens when you save people’s lives.”  (Cue the tissues).

Since the airing, I read an interview with Leon who said that the whole concept of The Union was ” really, really a surprise.  Elton’s a very generous and spiritually correct person. I’m quite thankful he chose me to do this for him.”

I’m sure I will watch the documentary many times, for a lot of reasons, but mostly because it gives me a glimpse into part of Elton’s life – how all that beautiful music is made – that music that has so touched my life – which is something that I never thought I’d get to see.

To Cameron Crowe:  Thank you for this incredible gift.

To T-Bone Burnett:  Thank you for allowing them to be true to their roots and their spirits.

To Reginald Kenneth Dwight and Claude Russell Bridges: Thank you for so many years of amazing music.  You may be “two old farts” (Elton’s words, not mine), but YOU.STILL.ROCK!!!

2 replies to To really go forward, you have to go back to the beginning…