I honestly wasn’t sure I would, after I heard the first release, Sad.  Perhaps it was just a shock to my EJ purist system.  You know, I’m not a huge fan of the George Michael version of Don’t Let the Sun Go Down on Me.  I prefer the EJ version of Lucy in the Sky with Diamonds over that of the Beatles.  And, of course, I’ve got the Two Rooms CD, but, I’ll say it again – I am a purist.  But, you know what, after giving the disc a few spins, it’s not so bad.

It seems to me, at least, that Pnau has been very respectful in their interpretations of the original songs, and I’m sure that’s why my reaction is so positive.  I truly did not know what to expect.  So I am pleasantly surprised.

It has been quite interesting to listen to the CD.  There’s that voice, those lyrics, and the music, and yet these songs are that different. They’re not just remakes or samplings.  They’re “re-imaginations.”  There’s a snippet from one song here, one from another there  – some of the snippets are vocals, some are instrumentation.  Meld several of these elements together  using a different tempo and vision and you get something very new, very unique. (Listen to Tonight overlaying Funeral for a Friend in Good Morning to the Night, for example).  Some would say modernized, I would say innovative.  And EJ himself has said “groundbreaking.”

What I’ve enjoyed most while listening to this CD is trying to decipher which original songs Pnau used to create their new songs.  You see, they just didn’t remake Mona Lisas and Mad Hatters into Good Morning to the Night.  It’s comprised of elements from Philadelphia Freedom, Mona Lisas and Mad Hatters, Funeral for a Friend, Tonight, Gulliver/Hay Chewed, Sixty Years On, Goodbye Yellowbrick Road  and Someone Saved My Life Tonight.  It’s kind of like an EJ scavenger hunt.

Plus, I’ve actually rediscovered a few songs that I hadn’t thought of or heard in a long, long time (Nice and Slow, Cold Highway, Three Way Love Affair).  So that’s a nice added bonus, too.

Oh, yes, and Sad has grown on me.  I like the flair that Nice and Slow adds to the “It’s sad, so sad” stanzas.

[Side note: Speaking of the UK, did you know that Good Morning to the Night is one of five official songs of the 2012 Summer Olympics in London?  Not bad.] 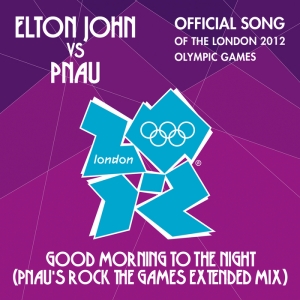 I’d have to say that Foreign Fields is my favorite song on the album.  (I feel inexact calling them songs, but not sure what the right term is in this genre called electronica).  Anyway, I really like both of the key elements that are blended here – High Flying Bird and Cage the Songbird (both of which I’ve blogged about, by the way)!  Lyrically, thematically, vocally, the songs do blend well together – and now musically, too.

Not that Good Morning to the Night will replace any of my favorite EJ albums as a new favorite, but I am duly impressed.  Very nicely done, Nick and Peter, very nicely done.